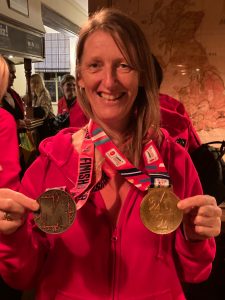 Justine celebrating after her second marathon in 7 days

Justine had run one marathon when she asked me to help her train to support a friend on her first marathon in Manchester. Justine’s main goal was to avoid injury from Chronic Exertional Compartment Syndrome.

We focused on how Justine ran and moved, with corrective exercises, drills, stretching and foam rolling. She worked hard in our weekly strength sessions and outside of these, with only the occasional missed workout or easy run when work demands took over.

In the final weeks before Manchester, Justine received an unexpected place in the London marathon. We discussed the challenge of two marathons in a week and she went for it, run/walking London with a friend and soaking up the atmosphere.

One week later, after some stretching, rolling and easy runs, Justine was on the streets of Manchester supporting her friend. Their target time was 5-5.5 hours and they ran the whole way, completing a much tougher than promoted new course in 4 hours 55 minutes.

Next, Justine’s taking on a marathon in Spring 2022 with the target of reducing her PB from 4 hours 35 minutes, a goal I have no doubt she’ll work hard for and achieve. I can’t wait to see her success. 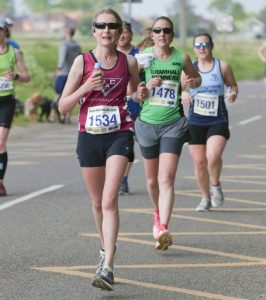 I met Hilary through the running club we were members at. She’d run her first marathon in 2019 in 4 hours and 1 minute, so when we began in August 2020, she was looking to run faster for her next race which didn’t have a set date due to Covid-19.

Nevertheless we tested Hilary’s current 10k fitness, and agreed on target times for a Spring 2021 marathon, with the ultimate goal being to run sub 3:45. Through each week of training she followed the plans to the letter, and engaged with the coaching to give me useful feedback so we could optimise the sessions.

The race date was pushed back meaning it would fall just 2 days after a road trip from Norwich to Edinburgh and back which we knew wouldn’t be ideal. There was heat, wind and a lack of crowds on most of the route making conditions tough, but Hilary battled it out on the day running 3:44:35, earning Good For Age entry to the London Marathon. She did it!

“I have really enjoyed the structure and organisation Kyle has brought to my running. He has been a huge source of support and encouragement and I’m delighted with the time from Boston. Kyle is absolutely committed to doing his best for his clients and is just great to work with.” 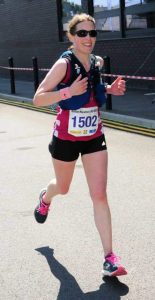 Kate finishing Boston UK with a PB of over 10 minutes

Kate had run a marathon personal best of 3:43:58 in October, but felt she needed more structure to reach her marathon goals. When we started working together in December, we set sub 3:30 and sub 3:35 as her goals.

Kate needed more speed over shorter distances, so we focused on 10k work, before moving on to half marathon training, ahead of the marathon block. Through test runs, we saw Kate run unofficial personal bests over 10k, 10 miles and half marathon.

In the middle of the marathon block, the race date was shifted back from April to the end of May. Despite the challenges of a hot and windy day, Kate ran 3:33:28, a PB of over 10 minutes, a well earned result for her hard work and dedication in the previous 6 months of training.

“Kyle’s motivation, knowledge and dedication has helped to give me the support and structure to achieve my running goals this year. Kyle works really hard for his clients to help them achieve their potential and genuinely cares about those he’s working with. He’s a great coach and a lovely guy and he’s in-depth knowledge of his sport is hugely impressive.” 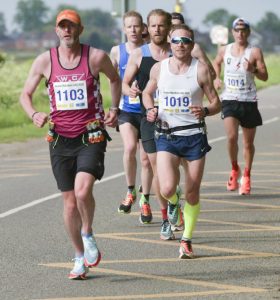 I’d known Kevin for 4 years before I began coaching him, and in this time he’d had a series of injuries that had stopped him reaching the heights he was capable of. Through a Runner’s MOT, we identified adjustments to avoid the issues whilst still allowing for effective training.

Having started with an initial 10 mile test run of 1:00:08, we agreed on sub 2:45 as a target, with flexibility in moving it forwards as he became fitter. Kevin followed the weekly plans perfectly, remaining injury free by adding strength training, technique drills and mobility, alongside a reduction in mileage and an increase in specificity of running sessions.

Prior to coaching, Kevin’s marathon PB was 2:55:08 from 2017. Despite hot and windy conditions in Boston, he ran 2:35:47, claiming 12th place, 1st in the 45-49 age category and a club record for the distance. It was an incredible achievement in just 4 months and proof of his consistent efforts.

“I have been running competitively for many years, but at this point (45) I feel as fit, fast and strong as I ever have.  This is 100% down to the professionalism of Kyle, the effort he puts in, the consistency of his training methods and support.”

Suzanne approached me after a Runner’s MOT to help her. She had recently run 4 hours 32 minutes for the Loch Ness marathon and wanted to run her next marathon in close to 4 hours.

A fall in the early weeks of coaching led to 4 weeks out, then Covid-19 hit and all of Suzanne’s races were pushed back. We kept to a maintainable training load, ready for Paris in October… then that was cancelled.

After a week or two of easier training, it was time to increase mileage ready to give it her best shot at a virtual marathon in November.

When the day for her marathon arrived, Suzanne did a great job, breaking a 6 year stalemate with the marathon by finishing in 4:08:09. A 4 minute PB and 24 minute improvement over her last marathon despite a tougher course and non-racing conditions.

Suzanne plans to continue improving her times from this solid foundation. 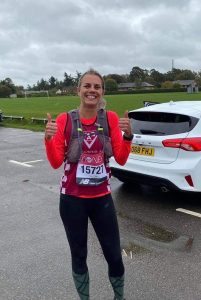 Michelle at the end of her Virtual London Marathon

Michelle had never run a marathon before October 2020, and although the London Marathon being virtual wasn’t what we’d hoped for, Michelle worked hard regardless.

We’d worked together through Runner’s MOTs every 8 weeks from late 2018 to mid 2019 when Michelle took a break due to a change in her personal circumstance. Throughout this break though, Michelle continued following the advice I’d given her. During our previous work we’d taken her half marathon and 10 miles times down by several minutes each, but when I asked Michelle to run a 10k test run in June, I was astonished at her progress to be able to now run 47:05.

In October, Michelle ran the Virtual London Marathon on a tough route with challenging weather in 3:45:51. I was so pleased for her and impressed by her work throughout training.

“…Kyle is always there for advice and is the most friendly, supportive coach I have ever had the pleasure to work with!”. 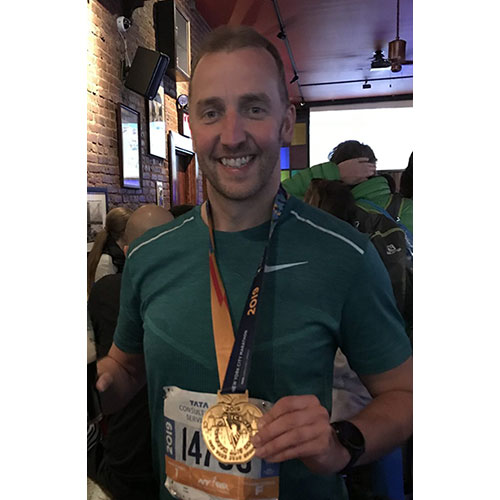 James celebrating his success in NYC

James stopped by my studio in June, after his Manchester marathon in April. We started working together in August but training had reduced due to work demands, so we set a target of 3:36 for New York in November.

We started with a Runner’s MOT to look at how James ran, his strength and flexibility, then set a plan to improve these factors. Training wouldn’t be ideal as James travels with work, meaning some runs would be missed and jet lag would have an impact too.

Over the next 2 months however, James did a great job with his training and our sessions together, and in New York managed a new PB of 3:26:45. The incline of the course is 7 times that of Berlin where he set his previous PB in 2017, and 5 times that of Manchester where he ran 3:36 in April.

To say I was proud of James for all he achieved in this time would be an understatement. 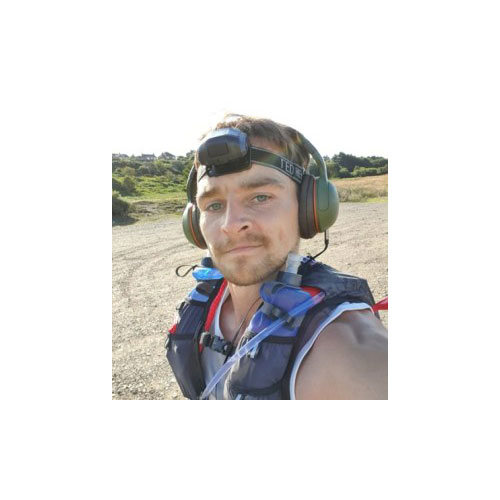 Daniel during an off-road training run

Daniel approached me in May to get him ready for the Robin Hood 100 mile ultramarathon in just 4 months. It was a tall order as his A goal was sub 21hrs with the B goal of sub 24hrs, and it would be his first ultra.

Daniel worked incredibly hard, and was 100% committed, not missing a single run. On the big day he did amazingly well, finishing in 20hrs 51mins, placing 8th out of 150. He’s an absolute inspiration and proves what can be done with hard work and commitment.

“I went to see Kyle with the thought process of taking some of the pain away while running stupid distances. Building ankle and foot strength with form correction and suitably hard training plans all came together and I couldn’t recommend Kyle enough”. 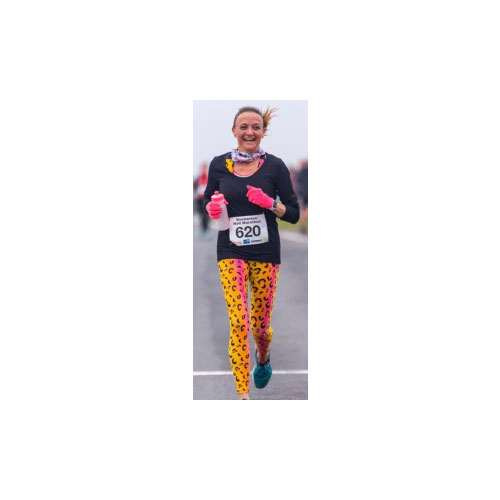 Rachel finishing the Snetterton Half Marathon

Rachel contacted me to alleviate the recurring injuries that were stopping her progress. From her first MOT at the end of September, with a half marathon PB of 2:25 from 7 years before, Rachel wanted to reach 2:15 in the Lowestoft half in October, and sub 2 hours over time.

We set her up with exercises, stretches and drills which would improve her arm and upper body movement to make her more efficient.

When I saw Rachel again in December, she’d achieved 2:11 at Lowestoft and ran 2:03 in November. By sticking to her exercises and drills, Rachel was running better and had improved both flexibility and lower body power.

Afterwards Rachel joined one of my Run Faster courses and we’re working together to complete her first marathon at Loch Ness in 2021.

“Brilliant second MOT with Kyle this morning. Amazed at the progress I’ve made in the past ten weeks and the work we did today on my heel lift really made me look like a proper runner! My times have reduced amazingly with Kyle’s help and he’s really making me believe those long-dreamed of goals are achievable – thank you!“

TOGETHER WE CAN CREATE YOUR OWN SUCCESS STORY. CONTACT ME NOW.
Go to Top